Here’s What Your Sleep Position Could Say About Your Health

Are you a stomach sleeper, a back sleeper, or do you curl up in the fetal position? 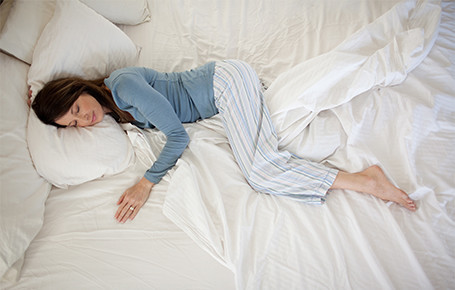 Chances are, you have a favorite sleep position, whether that’s curling into a fetal position or starfishing across the entire queen-size bed. Regardless of your position, how you sleep is a matter of whatever feels the most comfortable to you, says Steven Holfinger, M.D., a sleep expert at Ohio State University Wexner Medical Center.

One thing Holfinger points out is that the position you fall asleep in may not be the position you stay in all night. “You’re likely move to multiple other positions while asleep without even realizing it,” he says (you may even have realized this when you’ve woken up in the night!). But subconsciously (or unconsciously) positioning yourself a certain way can have an effect on your body, including alignment and some health issues. Here’s how the four most common sleep positions stack up in popularity—and how they might affect you during your waking hours.

This is considered the most common sleep position—47 percent of Americans curl up on their sides at night and 37 percent believe it’s the best position, according to research by the Better Sleep Council. “Fetal position is cozy, secure, and familiar from birth,” says Alex Dimitriu, M.D., founder of Menlo Park Psychiatry & Sleep Medicine.

Fetal position can improve circulation in your body, but curling up too tightly can restrict breathing and might leave you feeling sore in the morning. When sleeping, your chin should not be overly kinked to your chest and your knees should be loosely bent in order to promote breathing and blood flow.

Seventeen percent of people sleep on their stomachs with the heads turned to the side and their arms under or wrapped around a pillow. It’s the second most popular sleeping position, although 26 percent of Americans consider it the worst one.

The thing is, when you’re on your stomach, it’s hard to keep your spine in a neutral position. “That can cause the neck and spine to twist, which can worsen back and neck pain,” Dimitriu says. And because of the pressure it puts on your muscles and joints, as well as the twisting of the spine, it can exacerbate nerve pain and numbness, he adds.

People who sleep on their stomachs also tend to toss and turn more throughout the night, which could mean a restless night. If you’re prone to heartburn or acid reflux, sleeping this way could worsen your condition, Dimitriu adds. That’s when you want to grab that pillow to elevate you so your esophagus is above your stomach.

On Your Side, Not Curled Up

Thirteen percent of people sleep on their side with their arms out in front of their body, while six percent of people sleep like a log—on their sides with both arms down. The latter is the least popular sleep position, and those who sleep in a log position tend to toss and turn less throughout the night, according to the Better Sleep Council (they also consider themselves healthier than people who sleep differently).

“People with back pain related to their spinal cord may find sleeping on their side to be more comfortable,” Holfinger says. “It also changes the way gravity affects your upper airway anatomy and can make it easier to breathe.” It’s why this position is recommended for people with sleep apnea, a disorder in which breathing stops and starts while sleeping.

A downside to sleeping on your side: Because half your face is smushed into the pillow all night long, you might end up with creases and marks every morning. One small study found that kind of repeated pressure may lead to more wrinkles.

Those health-braggers aren’t necessarily wrong: This is a good option for most people, according to the National Sleep Foundation. “Sleeping on your back may actually be the best for back and neck pain because everything is lined up and straight,” Dimitriu says, because the body’s neutral position doesn’t put extra pressure on those areas. It can also be helpful for people suffering from acid reflux; just grab that pillow to elevate you.

However, for people who have sleep apnea, sleeping on their backs can worsen their condition, Dimitriu says, because the effects of gravity can cause the tongue can fall back into the airway, blocking the breathing tube. Back sleeping can also make snoring worse due to those same airway blockages. And one interesting fact about starfish sleepers: You’re more likely to sleepwalk.