Do Men and Women Sleep Differently?

Plus, experts share their tips for a better night’s rest. 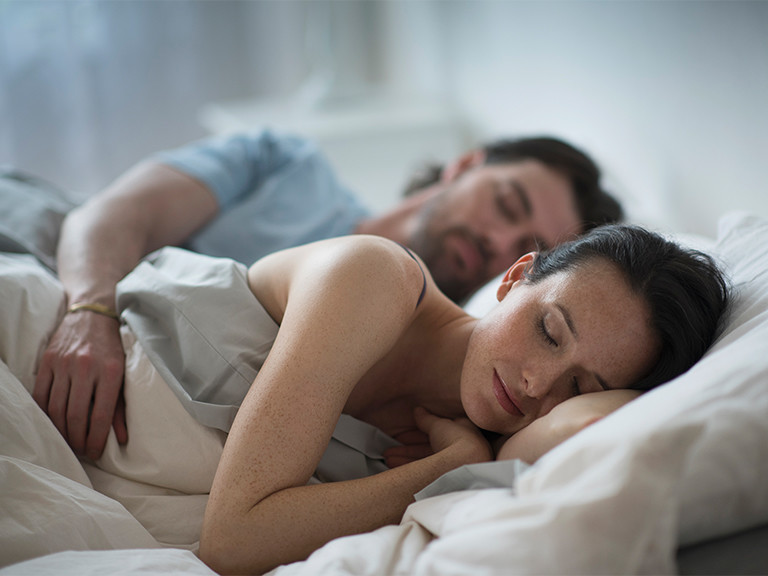 When it comes to sleep, experts say both men and women should aim to log seven to nine hours a night. But certain biological differences between men and women can make it harder for women to get their best rest possible—something you may have already noticed if you have an opposite-sex partner. Here are four, why they happen, and what women can do about it:

“On average, women are more likely to fall asleep earlier than men,” says W. Chris Winter, MD, president of Charlottesville Neurology and Sleep Medicine and author of The Sleep Solution: Why Your Sleep is Broken and How to Fix It. The reason? Your body’s natural circadian rhythms—the internal clock responsible for regulating sleep patterns—influences the body’s melatonin production, causing you to feel sleepy. As it gets dark outside, your melatonin levels body increase, signaling the body to prepare for sleep and causing your body temperature to drop. For women, their circadian rhythms of melatonin and body temperature are generally set to an earlier hour than in men—even when they go to bed and wake at the same time, according to a study from Brigham and Women's Hospital at Harvard Medical School. That same study also found that women’s circadian rhythms are shorter than men’s, by about six minutes. Cue the head-nod while watching TV.

How to reclaim your sleep: Unless it’s messing with your schedule, don’t fight the signs of drowsiness, Dr. Winter says. For example, if you’re ready to fall asleep at 10 p.m. and you need to be up at 7 a.m., but your partner isn’t tired until 11 p.m., it’s perfectly fine for you to go to bed first and get the rest you need. But if you’re sleepy early—say, 8 p.m.—and it’s stopping you from getting things done or causing you to be fully rested and awake at 3 a.m., then you might want to do something to stay awake longer. “When you’re starting to nod off, take the dog out for a quick walk, or get up and do something in another room,” he adds. “Keep yourself alert a bit longer to slowly shift your sleep-wake cycle.”

2. Women also tend to wake up earlier. stick with it, even when you’ve have a late night or on days you can freely sleep in. “A lot of people struggle with their sleep because the quality starts to dictate the schedule,” Dr. Winters says. For example, if you woke up early and slept well, you might be more likely to make breakfast or go for a morning run. But if you woke up early and had a bad sleep, you’re more inclined to hit snooze and wake up at a later time. “If you’re waking up at different times, the brain doesn’t understand what you want it to do,” Dr. Winters says. To get the best night’s sleep, his best advice is to wake up at a consistent time, every day.

3. Women are likely to experience insomnia. One in four women report suffering from insomnia symptoms—trouble falling asleep, trouble staying asleep, or both. Why? You might blame fluctuating hormones during the menstrual cycle, pregnancy, perimenopause, and menopause. Previous research has shown that women report poorer sleep quality and increased sleep disturbances during the week before their periods. Insomnia may also stem from moments of depression and anxiety. “Women tend to have a higher prevalence of dealing with depression and anxiety more than men,” Dr. Fargo says. “Because depression and anxiety are so closely linked to our sleep, it tends to relate to a higher incidence of insomnia in women.

How to reclaim your sleep: “With insomnia, a person doesn’t wake refreshed; they feel fatigued and sleepy throughout the day,” Dr. Fargo says. If this is happening to you regularly, cognitive behavioral therapy can help, he says. Different methods of therapy—such as guided imagery—help people associate their beds as a calm, serene place for sleep. “No reading, eating, or watching TV in bed if you have insomnia,” Dr. Fargo says. The brain starts to associate the bed with other stuff, making it harder to sleep.

It’s also important to know that waking occasionally in the middle of the night isn’t necessarily insomnia, says Dr. Winters. (Though annoying, to say the least!), Winters says. If you’re getting through the day just fine—no irritability or grogginess—try reframing your interrupted sleep, Dr. Winter suggests.

4. Postmenopausal women are more likely to have sleep apnea. sleep apnea or obstructed breathing than women, but the likelihood of women suffering from it rises as they enter menopause, Dr. Fargo says. During menopause, some women tend to gain weight, bringing their odds of developing sleep apnea closer to that of men, he continues.

How to reclaim your sleep: Reduce your risk for sleep apnea by avoiding alcohol, sedatives, or tranquilizers—all of which can relax the throat muscles. You should also stop smoking, which increases inflammation in the upper airways, and get treatment for allergies that cause nasal congestion. Lastly, maintaining a healthy weight is important, so make sure you’re eating well and getting regular exercise, both of which are always good ideas!